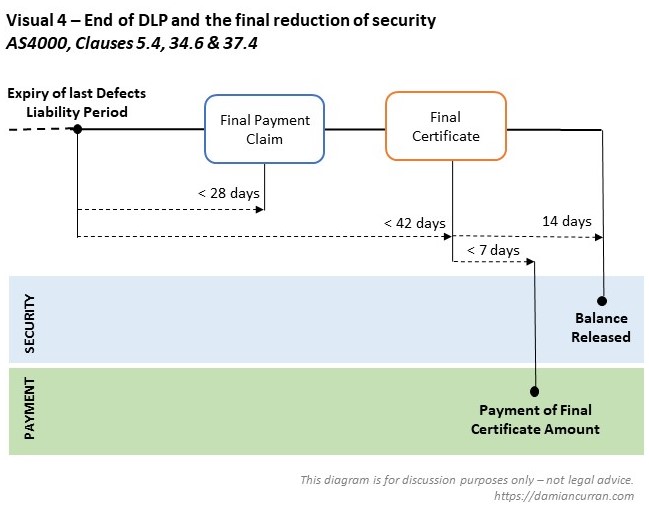 Visualisation makes contracts easier to understand, especially for non-lawyer, day-to-day users. Despite its benefits, the practice doesn’t appear to be widespread. In order to explore some of the reasons that lawyers might be reluctant to prepare visuals, I undertook a contract visualisation exercise on a commonly used construction contract, AS4000. In this post I present the visualisations, commentary on the design process and lessons learnt.

Contract visualisation is “the use of diagrams, images, and visually structured layouts to make contracts more searchable, readable and understandable.” (See Passera – Passera and Haapio have done substantial work on contract visualisation and much of my discussion herein is prompted by their works.) Using contract visualisation to supplement traditional, dense legalise, can make contracts easier to understand, facilitate negotiations pre-contract and assist with compliance during its operation. The benefits are particularly pronounced for non-lawyers, such as project managers, sales persons and contract managers (especially non-native English speakers) who, unlike the lawyers who prepare the contracts, are actually expected to use the document and comply with it on a day to day basis.

However, despite its intuitive benefits, in my experience contract visualisation is not commonly adopted in the legal profession. The occasional visuals I have seen used are often rudimentary or a cluttered, re-arranged version of the text they seek to simplify. The absence of contract visualisation from the legal profession is a loss for the clients across the many industries which have to operate contract with dense legalese every day – sales, procurement, construction, services – who could otherwise be using documents which are substantially more workable.

The current absence of contract visualisation may be caused by a lack of client-side pressure to deliver visual solutions, an absence of visual design training and skills in the profession, the absence of creative ideas or templates illustrating how to visualise certain provisions and the general risk aversion that appears to permeate most legal practice.

To explore those reasons further, I decided to engage on my own contract visualisation process. I wanted to explore:

(1) Whether it is difficult to create visual designs which are helpful, intuitive, accurately reflect the text provisions and increase clarity;

(2) What types of contracts / provisions can visualisation assist with? What can’t it assist with?

(3) Are the drawing tools difficult to use and how long does it take to prepare a visual?

To do this, I have created visualisations of certain provisions from the AS4000 standard form construction contract. The AS4000 is widely used in Australia and has a body of existing case law and commentary. My goal was to make visuals of certain provisions within it which are intuitive on first glance, clean (but not overly simplistic) and increase clarity.

Set out below is my visual representation of the terms and some specific commentary on the thought process and design of each visual. After that I set out the key lessons I learnt from the process. The relevant contract text is extracted at the end of the post for reference.

I made the several design decisions in preparing this visual. Documents and events are described along the top lines, whereas all timing is indicated along the bottom. Dotted lines connote optional or uncertain documents or steps. Colours blue and orange are indicative of the different parties providing the documents. The “<” symbol used in the timing provision was a simple, shorthand method of indicating “within (xx) days”.

The “CERTIFIED” stamp was used to indicate the approval of the existing assessment, reflecting the common conception of a ‘rubber stamp’ approval. I was of the view that the alternative (writing the word ‘certified’ in normal text in the second orange box) looked like a brand new document was issued at this stage, rather than just a certification of the existing document.

This is a visualisation of the progress claim and certificate procedure set out in clauses 37.1 and 37.2 of AS4000.

I have introduced a colour scheme (the green bar reflecting payment), which I will adopt in later visuals. I have also kept the visual rules from Visual 1, such as the colour coding and timeline layout. This provides consistency so that the contract user does not need to re-learn the various keys for each new visual. During the design process, I only added this colour scheme after I had begun working on Visuals 3 and 4, so that the whole package of visuals weren’t complete until I had iterated a few versions.

Visuals 3 & 4: Completions and the reduction of security

This is a visualisation of the completion procedure and the associated partial reduction of security. 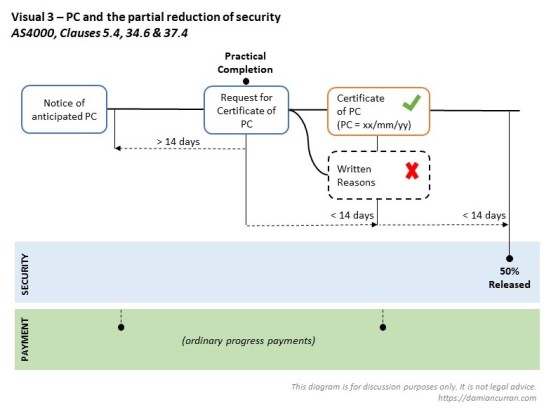 This is a visualisation of the final project completion and the associated final reduction of security. 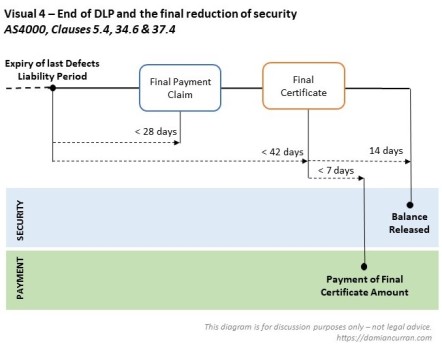 I used slightly amended notation, the “>” symbol, to reflect “at least (xx) days”. A new colour scheme (the blue bar for the release of security) is introduced. All the other design rules from the earlier visuals are consistent. I also tried using the large green tick and red cross which, similarly to the ‘CERTIFIED’ stamp in Visual 1, can immediately be understood by the user to mean ‘approved’ or ‘rejected’.

The key lessons that I learnt in this process are:

(1) Even if the general ‘type’ of visual to use might be obvious given the nature of the clause (eg. timelines to reflect clauses dealing with procedure), the actual detailed design requires lots of smaller decisions. Those include the seemingly mundane details about lines and arrow direction, whether to use dashed / solid lines, colour coding and consistency across multiple visuals. These decisions may turn on small changes in wording in the text and affect the accuracy of the visual;

(2) The visualisation usually can’t accommodate all the particulars of the text provision without becoming cluttered and interfering with the overarching goal of increasing clarity. Therefore, at least for the provisions I looked at in this exercise, the visuals must supplement the text, not replace it;

(3) The type of information from a text provision which can be translated into a timeline visual are timing and sequence, names of documents or events and the parties responsible. The type of factors which cannot cleanly be transferred into timeline visuals are all consequences of non-compliance (which can lead to too much clutter for too rare an occurrence) and precise details of the documents or the required content of documents (which again would often lead to clutter and detract from clarity);

(4) Because the visual cannot describe every scenario and every detail, it is better described as a simplified ‘ideal’ scenario – ie. what the procedure should be, all going to plan. It doesn’t replace detailed text and it doesn’t replace legal advice addressing bespoke factual scenarios. Despite those limits, in my view such visuals can still be greatly beneficial to non-lawyer users of the contract who otherwise would not engage with the contract at all. In the AS4000 construction contract, that might include contract and project managers, site foreman or administrative staff;

(5) The actual mechanics of drawing and preparing the visual are relatively simple to anyone with a modicum of computer literacy. I prepared my visuals in PowerPoint. By far the more difficult challenge in the exercise was the above decisions about design and layout, not the actual drawing preparation.

One Reply to “An exercise in contract visualisation using AS4000”